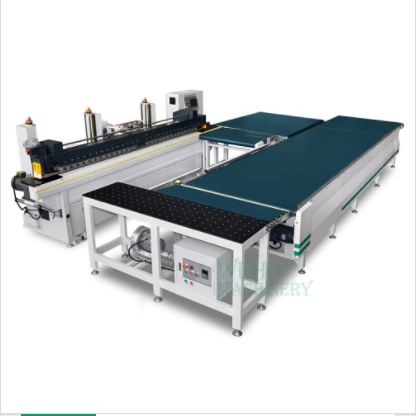 The structure and body characteristics of the edgebander.

08 Apr 2021
The edgebander is mainly used for the edge banding of panel furniture. It has the characteristics of automation, high efficiency, high precision and aesthetics. It has been widely used in various panel furniture manufacturers.

The structure of the edgebander is mainly composed of a machine body, various processing groups, and a control system.

First, the body part of the edgebander, the most important part related to accuracy is the upper and lower beams, because it is related to whether the processed plate can run in a straight line, so as to ensure that each processing group can work accurately. Mainly divided into two types of beams:

Second, the key part of the fuselage, the base of the fuselage. The more advanced method is laser cutting of steel plate and welding at one time. The advantage is that the body is firm and does not deform, thereby increasing the stability of the whole machine. The relatively backward method is frame welding, and then supplementary steel plate.

Third, the modules of the CNC edgebander can be independently designed, most of which have been patented, and the feeding speed has reached the advanced level of foreign countries. Nowadays more advanced PLC includes LG series, Siemens series and so on.

Fourth, the structures of the various ministries and groups are basically similar. Corresponding parts and groups can be added or reduced according to actual processing requirements. Among them, the technical difficulty of profiling tracking is relatively high. Although the machining process ensures the precision of the components, it requires the precise control action of the PLC, the amount of knife, and the profiling angle, so only a few domestic manufacturers have profiling tracking technology .